Wishlist the game on Steam by clicking here!

One night 198X in the small town of Watford, Arizona, a satanic cult has unwittingly summoned the ancient evil Baphomet catapulting the town into chaos. John, awoken by the kidnapping of his neighbor Ophelia, sets out into the town to fight back against the demonic invasion and rescue Ophelia before it's too late.

Kingdom of Night is an isometric, story-driven, action-RPG with an expansive, interconnected map and quest system. Battle nightmarish creatures, customize your abilities, and collect unique items and equipment. In order to beat the game, you’ll have to infiltrate the massive lairs of the five demon lords, and take on the apocalyptic boss battles at their centers.

Kingdom of Night is a game about coming of age, cosmic horror, and true love. The player takes control of John as his adventure's lead him through an hour by hour experience of what may be everyone's last night on Earth. He will encounter unearthly evils, Demon lords, afflicted townsfolk, and high school bullies... All nested in a larger than life fantasy that brings ultimate evil to a neighborhood near you.

Playing The Main Quest - The main quest in Kingdom Of Night involves defeating the Five Demon Generals and gaining access to Baphomet's fortress, Leviathan. After the first introductory chapter of the game, which we call Midnight, the entire map of Watford opens up for the player to explore, and the Five Demon Generals can be defeated in any order.

Picking Your Class - When starting the game, you can choose from 1 of 9 classes. The class you choose decides your base play style, while the skill trees allow for further customization. Rather than implementing a balance on all classes, each class is weighted differently providing each with a unique play-style.

Building Your Character - Each class has a skill tree split into 3 branches. Each branch contains 10 talents. As you level up, you are allotted points to spend into any of the the three branches of your class. Once you have chosen your first talent in a branch you are locked into that specific branch until level 10. When you have reached level 10, you are free to cross over into another branch, allowing you to fully customize your play-style.

Finding The Best Gear - In Kingdom of Night, you can get new equipment in a number of ways: via random drops with multi-tiered loot tables and variable drop rates, quest rewards, and by finding items hidden throughout the town. Items range from totally Common to completely Unique. The items you collect provide an extra dimension to character stat development and have special abilities that will make you even more powerful. 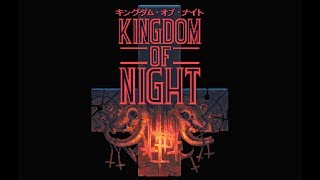